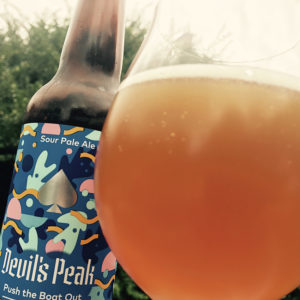 “Brewed and bottled by our friends at Fierce Beer,” states the label alongside a warning that this beer has been, “produced in a facility that processes nuts.”
I mention this as these facts are pretty much the only things of interest that I can find in this beer.
Push The Boat Out is a Sour Pale Ale and it’s singularly one dimensional, from its watery cider apple smell to its watery cider apple flavour, I spent my time struggling to find anything else to mention.
There’s just a big wash of tart apple and maybe just the vaguest touch of something caramelly right in the finish, but it’s definitely not enough to rescue the beer.
I’m afraid I poured it away.