It’s a Pirate Life For Me

Pirate Life Brewing, founded in Adelaide in 2014, has set its sights high and within three years has gone from serving its local drinkers to entering markets across the globe.
It hit the shores of the UK about a year ago and I first came into contact with them when my local beer shop, Brewklopedia, stocked their Imperial India Pale Ale.
It came in a pint can and looked and tasted great.
After a quick chat with Sean, Pirate Life’s UK Ambassador, I got hold of the rest of the range and intended to pin him down for an interview, but as it is with life these days, kids and work and all sorts of stuff has contrived to keep us apart.
The nearest we came was an attempted phone call during which we could hear only white noise.
Maybe other parties were jamming our signal.
That’s the life of a Pirate for you.
And so, not wanting to have these reviews hanging about too long, I’ve decided to publish them now with an interview to follow later.
I’ve included my original review of Pirate Life’s aforementioned IIPA as I am a bit of a completist. 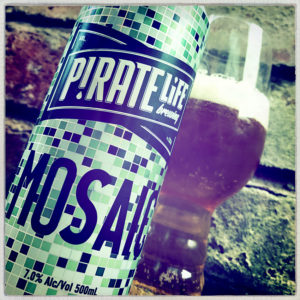 Mosaic IPA (7%) is a great big can of fruity fun.
It’s a beery delight that hides its booze frighteningly well.
Pouring a bright gold with a fuzzy little head, the smell is lime and cucumber, blueberry and bubblegum, round and fruity and playful, with a zingy little edge that invites you in.
And when you do dive in the Mosaic changes from the softness of the aroma to a big sharp kick of fresh herbal leaves, steely and dry, along with some sticky pine resin and lemon zest, before a rich mango juiciness comes in, bringing with it a wash of soft caramel and pancakes from the malting that recedes again to leave a floral tinged crisp bitter finish.
This is lovely stuff. 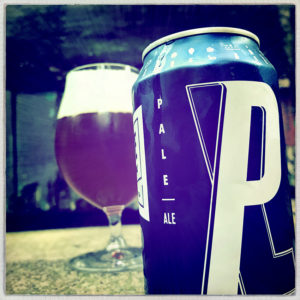 Pirate Life’s Pale Ale (5.4%) might be the brewery’s least exciting beer but it’s still a very good little drink.
It’s quite a dark amber colour for a Pale Ale, sitting all slinky and seductive in my glass with its big billowing head popping an fizzing with life.
The smell is equal parts yeasty bread dough and lightly spiced red berries, an taking a mouthful you find the Cascade and Mosaic hops combining to give you some resinous woody dryness, pencil shavings and a good hit of pear juice, mango and metallic herbal leaves, while the malting is a soft chewy toffee wafer bar that ensures the beer has a solid body. 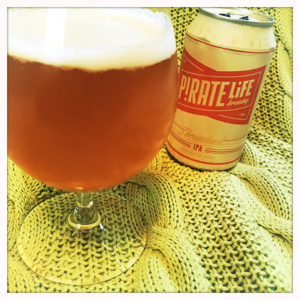 If you fancy a Table Beer with plenty of body you could do much worse than grabbing a can of Throwback IPA (3.5%).
Pouring a golden apricot with a little foamy head, the aroma is a gentle waft of lemon curd and honey.
The malting is soft and gentle, yet has enough backbone to hold the beer up, its waffles and creamy caramel, brown sugar and shortcake making the beer feel round and full.
The hopping in modern low alcohol IPAs, for me, is often far too forced and can make the beer feel harsh and thin, but here the hops are weighted just right.
They give you a slap of hedgerow greenery and some lemon zest and orange marmalade, but the balance against the malting is just right.
Very good. 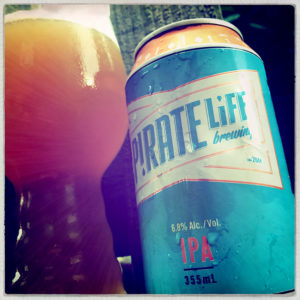 The IPA (6.8%) has been brewed with Simcoe, Centennial and Riwaka giving the beer a Passion flower and redwood aroma.
There’s a good malt body that’s packed with honey and brioche, waffles and caramel, and there’s a nice little spicy yeast bite bubbling up in the background.
The hops are all mango and herbal leaves, lemon zest, marmalade and tobacco leaves all glued together with woody resin making for a drink with a long dryness and a twist of sticky brown sugar syrup right in the finish. 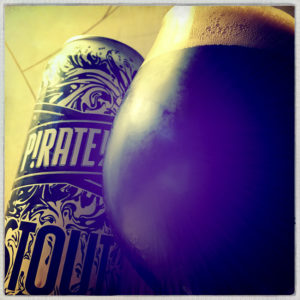 My favourite of all the range is almost certainly Pirate Life’s Stout (7.2%) as it is thick and chewy and as dry as a bone.
It pours an impenetrable black with a thick foaming cappuccino head and smells of coffee and biscuits.
The malting is all dark bitter chocolate, black coffee and molasses, it’s as sticky as tar and sweet with runny honey, a lick of salty Marmite (or should that be Vegemite?) and a splash of Cola that’s made thicker and more creamy by the addition of Oatmeal to the brew.
The Fuggles, EKG and Columbus hops add liquorice root earthiness, hedgerow pithiness and a tobacco leaf woodiness that all add weight to the long and heavy dry bitterness of the chocolate and treacle tart finish.
Absolutely superb. 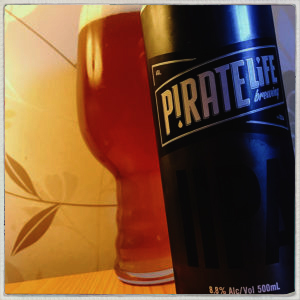 As for the Imperial India Pale Ale (8.8%), this peachy golden beer with its wispy white head smells of redwood resin and mango, and as you take a mouthful you find that the flavour is underpinned by a big sticky wood resin base.
Around it swim all sorts of other good stuff, like spun sugar and honey, bran flakes and toffee muffins, and a massive bitter hit of hops.
There’s lime zest and hazel leaves, rolling tobacco and grapefruit pith, and then a little blob of marmalade before you are returned to the resinous stickiness that glues itself to the roof of your mouth and pushes you into the super dry bitter finish of this very good beer.