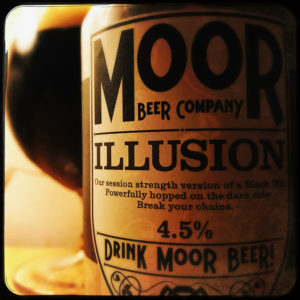 Illusion is a Session Black IPA.
Or an extravagantly hopped Mild.
No, it’s really the former, though I love the idea of the latter as it feels even more incongruous and likely to cause arguments than Black IPAs did a few years ago.
Anyhow, what’s more important is what it’s like.
It’s very good is what it’s like.
An inky black beer with a cappuccino head, it smells of herbal hedgerow foliage and chocolate, and the chocolate sloshes about when you take a mouthful, along with some toffee and bran biscuits.
The hopping is sharp and keen, bitter and steely herbal leaves and a blob of marmalade making for a beer that feels much bigger than its ABV and leaving you with a superbly dry bitter black coffee drenched finish.