The Draft House By The Sea Festival Pale Ale (4.5%) 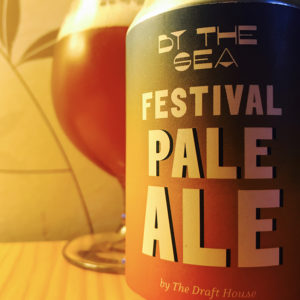 Brewed by The Draft House at Gadd’s brewery in collaboration with Moshi Moshi, this Pale Ale has been made for the By The Sea Festival and though it isn’t the most exciting Pale Ale in the world it is a million times better than the beer generally found at festivals.
It’s a bright golden Pale Ale with a little fizzing head that smells of peaches and pineapples, its malting is shortcake biscuits and caramel wafers, a dab of honey and a swish of salty peppery spice from the yeast.
Then there’s the Citra, Mosaic and Summit hops that bring lemons and limes, mango, peach pithy hedgerow foliage making for a finish that’s clean and sharp and bitter.
Very good.