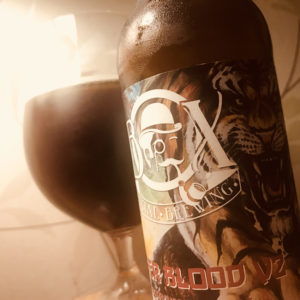 Back in the early eighties I bought an album called “The Cage” by a band called Tygers Of Pan Tang.
It wasn’t very good.
This beer has been brewed in collaboration with the very same band and it’s on a par with the album I had.
It’s a limp and watery red ale that is desperate for more body.
The aroma is quite nice, all red berries and plums, but the beer pours and feels a bit flat with a toffee and biscuit malt that’s thin and insubstantial and a crunchy red leaf litter hopping that lacks bite.
With a bigger body and a lot more fizz this could be a really decent Red Ale, but as it is it does nothing for me.
Perhaps they could have called it “Love Potion No, 9”.