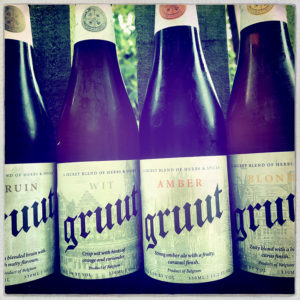 Did you know there was a time before hops?
It’s hard to believe, right?
I remember reading some years ago that a grain based fermented drink that doesn’t have hops in it should be called an Ale and got involved in a tongue in cheek discussion in the Twittersphere about how a certain organisation ought to only be championing drinks without hops in them.
Oh, how we all laughed.
Anyhow, this kind of brewing would get its bitterness and sweetness, tartness and other layers of flavour from herbs and spices.
Master Brewer Annick De Splenter at the Gruut City Brewery in Ghent, Belgium, has decided to look back into this pre-hop history in her part of the world when in the Middle Ages there were brewers on the German side of the river Leie using hops in their Lagered drinks and on the French ruled Left Bank it was all about herbs and spices, and make some beer (Ale!) in this manner.
There are currently four different drinks available I was genuinely surprised by what I found, especially as I am a self confessed Hop-Head. 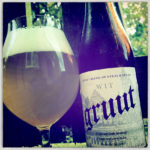 The Wit (5%) pours a lovely lemon yellow with a big fuzzy head and smells like a creamy lemonade float.
The malting is a very soft and smooth affair, all vanilla ice cream cones, runny honey and yeasty French bread, and there’s a warm earthy spiced tang from the yeast.
And I have to say, though I would like to feel the crisp sharp smack of hops, the orange peel and coriander more than make up for it with a fruity piquant kiss.
Very impressive. 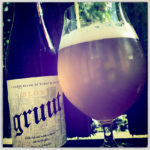 It’s a funny thing, isn’t it? The need for hops in our beer.
I mean, this Blond (5.5%) is perfectly drinkable, really quite enjoyable actually, but even with that said it feels like it’s missing something.
It’s missing that sharp bitter thwack that hops would provide.
And yet it may just be because I know that they’re not there because, if I’d not been told, I’d probably have assumed that they were as this Blond delivers a spun sugar and waffle malt base, a little sprinkling of salty yeast and the soft metallic hit of garden herbs, giving the beer a little bitterness in its otherwise sweet finish. 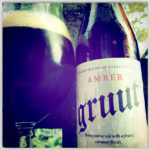 The Amber (6.5%) doesn’t really work for me as it tastes rather medicinal while smelling thin and watery.
It pours a nice enough conker red but the treacle aroma is far too far away and vague and what should be a sticky toffee body is rather limp.
And then there are the herbs replacing the hops which include, I’m guessing, some aniseed and burdock, but whatever the mix is the finish tastes like childhood medicine.
What this beer feels like is that the brewer was trying to head somewhere near to a Dubbel but sadly missed the mark. 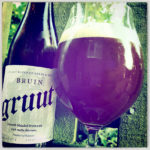 Finally we come to the Bruin (7.5%) which is a blended beer brewed with nuts as well as herbs and spices.
And you know something?
I really like this one.
It’s a deep chestnut coloured beer with a little foamy head and it smells of hazelnuts and treacle tart.
The body of the beer is round and chewy and satisfying, all toffee and pretzels, honey and Belgian waffles, and there’s a good earthy yeast bite lurking in the background.
And here, in a style that doesn’t rely so heavily on its hopping, the herbs and spices and the nuts work very well, giving the beer a woody and warm, lightly spiced kick and a smack of hedgerow greenery.
The finish is sticky and chewy and warmed through with a boozy haze that has me taking my time and savouring each mouthful.