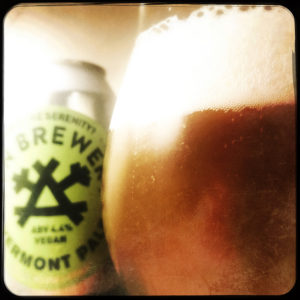 More Vermont yeast action.
At this rate the world’s going to run out of brewing’s current favourite.
Gun have decided to use it in a Pale Ale rather than the almost obligatory IPA and they’ve come up with a super little sessionable beer that pours a pale gold with a big frothy head and smells of lemon curd and honey.
There’s a lovely light shortcake and caramel malt, a hint of salted pecans and just a lick of runny honey from the malts while the hops give you a sharp bitter garden border, lemon zest and lime rind hit.
And then there’s that yeast that brings a deep and dirty earthy warmth that’s full of spicy pickled lemons and orange marmalade.
Lovely stuff.