Lighting Up The Past: The Lantern Tankard 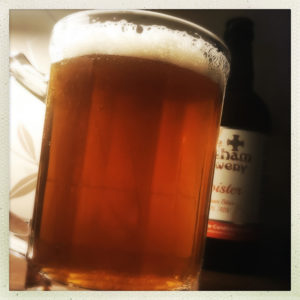 At one point in time The Lantern Tankard, a ten panelled, handled pint glass was so popular that it became the star of the Brewers’ Society promotional campaigns, but in recent years we have gotten so used to many and various different shaped glasses, especially in the modern world of “craft” beer that very few people ever use this traditional beer glass.
For me, the Lantern glass is my dad having a pint in our local, which is why I’m drinking a Best Bitter out of one while I write this piece.
It was this glass that helped ring the changes for both brewers and landlords when it replaced pewter and pottery vessels in the early part of the last century, meaning that the drinker could clearly see the beer and whether or not they were being short changed by the publican when they bought a pint.
And now The Lantern Tankard is available again as a faithful reproduction of the original that was produced in West Yorkshire all those years ago.
It may not take over from our now beloved IPA glasses and stemmed Imperial Stout tulips, but it makes for a few minutes of warm nostalgia and it certainly feels good to hold.
This one’s for my old man.
Cheers dad.

Founder of CAMRGB. Member of The British Guild Of Beer Writers. Leftist bigmouth. Old and grumpy.
View all posts by Simon Williams →
This entry was posted in CAMRGB and tagged Beer, Best Bitter, Bitter, CAMRGB, Drinking, Glasswear. Bookmark the permalink.

2 Responses to Lighting Up The Past: The Lantern Tankard