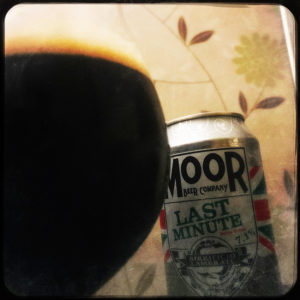 When I lived in Italy, between 2002 and 2004, the beer options were pretty terrible and as a result I gorged on cheap red wine.
Justin of Moor has spent the last year or so hanging out and brewing in Italy where the beer landscape has changed beyond all recognition, and this beer has been brewed in collaboration with Birrificio Lambrate.
Last Minute is a spiced Porter and it’s really rather good, pouring an inky black and smelling of cinnamon toast and dark chocolate, the initial flavours mirror the aromas filling your face with dark chocolate and cinnamon, toasted wholemeal bread, honey and black coffee.
There’s a good hit of dry and brittle, pithy autumnal leaf litter, lemon zest and pine resin, and as you drink the spices build, bolstered by a boozy warmth that makes for a beer with a big round peppery finish.
Lovely stuff.