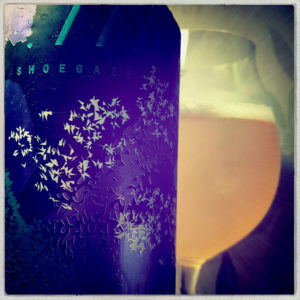 I suppose it would have been in my very early twenties that I first heard the term “Shoegaze” used to describe a particular kind of band that played loud and distorted yet dreamy music, floppy fringes dripping downward towards the floor.
One of the bands, Pale Saints, I had played with a few times and considered friends and they were anything but Shoegazey.
They were big and colourful and, if anything, psychedelic.
Not introverted and coy as the Shoegazing bands – Ride and Chapterhouse et al – often painted themselves.
In fact, one could probably go as far as to say that these bands were taking the blueprint of My Bloody Valentine’s behemoth of noise and making it all emotional and ultimately, a bit weedy.
But this isn’t a music critique, this is a beer review and regardless of whether or not Stillwater have named this beer in honour of the musical movement or not, this IPA with a Saison yeast is an absolute delight.
It’s big and bright and lively, not a bit like the Shoegazing bands, pouring a sunny yellow and smelling of lightly spiced orchard fruit.
There’s a solid spun sugar, brioche and honey malt body, loads of sherbet lemon, lime leaf and garden herbs from the hops, and then a delicious rush of salty earthy yeast that rounds the beer out and makes the finish feel chewy and warm.
Shoegaze is a fabulous beer named after the wrong musical genre.