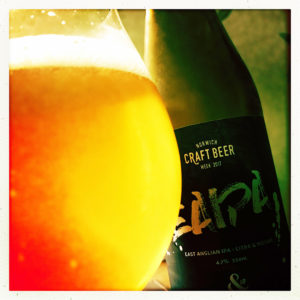 With a lovely Dolly Mixture aroma and its peachy colour this is a fine way to be introduced to a brewery, though I’m not altogether convinced that this isn’t a Pale Ale rather than an IPA.
And I don’t just mean because of the low ABV, because there’s a lovely balance between the hops, all marmalade and rolling tobacco, lemon zest and passion fruit, and the malting that gives you lots of caramel and wafers, toffee and a hint of tamarind.
It’s gentle and easy drinking, soft and satisfying that makes me feel far more that this should be called EAPA rather than EAIPA.
Regardless of what you or I or they or anybody calls it, this is a very nice little beer that deserves hunting out.