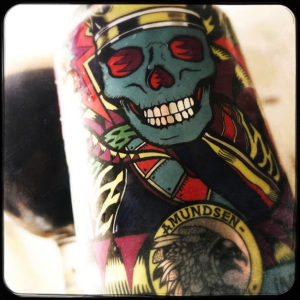 Rebel King is an Imperial Stout and it’s marvellous.
But it’s actually not an Imperial Stout, because really it’s an Imperial Vanilla Coffee Chocolate Milk Stout, brewed as it is with cocoa, vanilla and lactose.
This is a sweet beer, a dessert beer, a pudding of a beer, a beer to slowly sink into, a beer to bathe in.
Rebel King smells of chocolate and Machiato, and it pours a deep purple brown.
The malting is all treacle tart and chocolate ice cream, Belgian waffles and runny honey, and there’s a crunchy autumnal leaf litter hopping that adds some orange marmalade and nettle tea brightness to the beer.
But as you drink the sweet chocolate, creamy lactose and rich vanilla build and build, making Rebel King feel big and creamy, warm and sexy.
This is one hell of a beer.