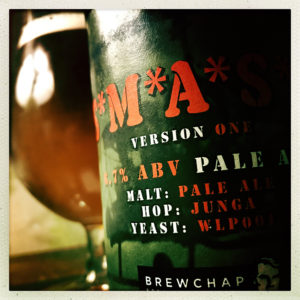 Ian really likes his high ABV beer, and he is an absolute master at making it.
S*M*A*S*H is a monster Pale Ale brewed with Junga hops, a California Ale yeast and pale malts that was made for a Leeds Homebrew Club competition.
Most importantly it’s damned good.
And it’s the hops that do it, though perhaps not in the way you might imagine.
They’re actually quite subtle, working with the yeast to create a round fruity mandarin and orange marmalade flavour, underpinned by some earthy warm spices and soft and subtle caramel and wafers from the malts.
All of this is pushed forward by the boozy heat that makes the finish feel so big you could eat it with a spoon.
More fabulous home Brewing from our man at BrewChap.