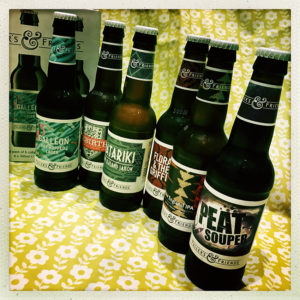 When I heard that Fuller’s were brewing collaborative beer with Cloudwater, Moor, Fourpure, Hardknott, Thornbridge and Marble I got rather excited.
For some time Fuller’s have been my very favourite of the UK’s big breweries, their London Porter, Bengal Lancer and more recently ESB being a staple of my beer fridge, and so to see them bring in these other breweries to work with really appealed as, if it worked, not only might Fuller’s remind some of the Craft Geeks out their that ignore them just who they are, but it might also turn some of the more traditional beer drinkers onto a new world of modern breweries and beer styles.
Each beer was brewed at Fuller’s and paired a different in-house brewer with the visiting collaborators.
And on the whole I think it’s a triumph. 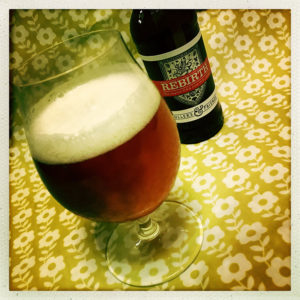 Rebirth (6%) is inspired by the original ESB recipe and brewed in collaboration with Moor Beer Company.
Imagine Fuller’s ESB with a little less sweetness and a much warmer alcohol hit and you’re somewhere close.
Pouring a bright amber the aroma is honey, whisky and peaches, and taking a mouthful you find get a burst of orchard fruit, shortcake, honey and digestive biscuits from the malting, coupled with a splash of pithy hedgerow greenery, a hint of aniseed, some lemon sherbet and a lick of marmalade from the hops that lead you to a lovely bitter sweet finish edged with a hint of tamarind.
Very good. 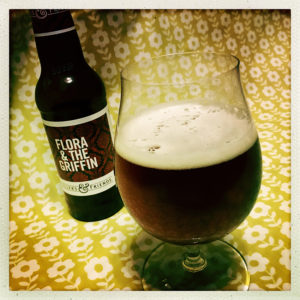 Flora & The Griffin (7.1%) is brewed in collaboration with Thornbridge, and those of you who know me will know I’m not a fan of that particular brewery.
This, however, is pretty good.
It’s a Red Rye Ale that had me saying, “mangos,” as soon as I took my first mouthful.
There’s a really big hit of mango flesh from the very first taste, and it’s a nice thing to find.
You’ll also find honey and doughnuts from the malts, along with that particular earthy meaty thing that rye can do, and a slap of lemon curd, mandarins and steely herbal leaves from the hops.
The best Thornbridge beer I’ve had in a very long time. 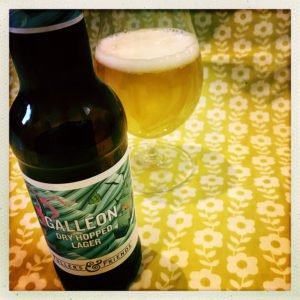 Galleon (4.8%), a dry Hopped Lager brewed with FourPure, suffers from smelling and tasting way too thin.
It’s a soft, almost watery affair and, especially given its reasonably sized ABV, a bit of a disappointment.
The aroma is distant hedgerows and a hint of honey and the malting follows suit with a rather limp caramel and wafer heart, while the hops are rather apologetic in their herbal foliage and lemon rind waft.
The finish feels quite a lot like the beer has been diluted with two parts water, which is a great shame as it makes Galleon by far the weakest of the range. 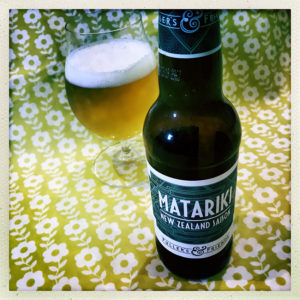 Matariki (5.8%) is a New Zealand Saison, that is it’s been brewed with a Saison yeast and New Zealand hops in collaboration with Marble Brewery.
What’s more, it’s rather splendid, though perhaps bottle conditioning it might have helped the Saison flavours to have built a little more than they have.
The malting, a mix of oats, rye and spelt, give the beer a creamy nutty body, some toffee brittle and shortcrust pastry, and the hops are a blast of gooseberry and grapefruit, kiwi, melon and basil.
And then there’s that yeast lurking in the background with its warm and dirty, spicy bite that I’d like to be bigger, but gets away with the size that it is.
Very drinkable. 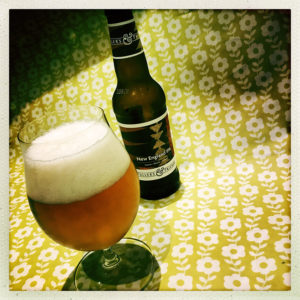 New England IPA (7%) has been brewed with Cloudwater Brew Co. and as you might imagine, it’s a fruity affair.
Using lots of oats in the bill, the beer feels rich, smooth and creamy, and it pours a bright gold with a big foamy head.
The aroma is peach and passion fruit, and that soft fleshy fruit builds as you drink, the yeast adding an earthy, lightly spiced apricot to the mix, while there’s toffee shortcake and honey form the malts and melon and mandarin, lemon sherbet and papaya from the hops.
The finish is long and bitter and very more-ish. 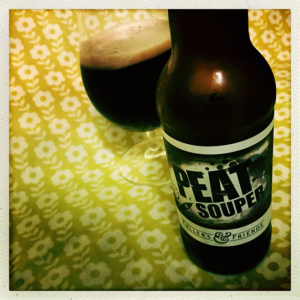 Peat Souper (7%) is a Smoked Porter and it’s my favourite of the six offerings in the case.
Brewed with Hardknott Brewery, the beer is deep and complex.
It pours an inky black with a little cappuccino head and smells of chocolate, bonfires and plum compote.
The malting is heavy with molasses, rum and raisin chocolate, digestive biscuits and the meaty goodness that rye always brings to the party, while the hops – all English varieties – give you a little aniseed, nettle tea, orange marmalade and the pithy steeliness of basil leaves.
All this and a finish that is big and satisfying, packed with sponge pudding sweetness makes this my pick of the bunch.

The Fuller’s & Friends case has been produced for Waitrose and will be available in shops in time for Christmas.