Posted on November 2, 2017 by Simon Williams 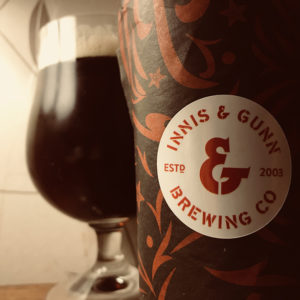 Innis & Gunn have had a bit of a rebrand and I quite like their ampersand, though I’m not entirely sure where they are intending to sit with it.
I really like the new typeface that has been chosen, it’s modern and sharp and hints at cut out templates for spray cans and, dare I say it, something a bit Craft-y.
The fact that they’re making a much bigger thing of the ampersand is interesting, certainly from a marketing point of view, as it is an inclusive sign, the word “and” being an inclusive word, which gives us signifiers that the brewery is open and inviting and wants us to be involved.
So, are they going for full “Craft” remodel or just having a bit of a change, because as I see it, even though I like what they have done with the look of their branding I’m not altogether convinced that it’s something that is going to massively alter their demographic. 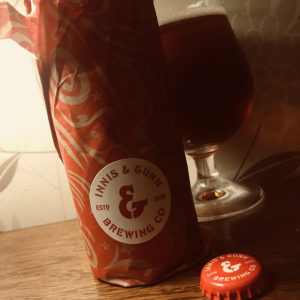 In other news, and I’ve never been a big fan of Innis & Gunn beer, their new Blood Red Sky is pretty good.
And that’s mainly because the rum barrel flavours are rather subtle, adding a gentle warm woodiness to the background of the beer and allowing the big chewy malts to come through.
So you find toffee and walnuts, bread crusts and honey along with a little slap of crunchy autumnal leaf litter from the hops.
Not a bad little beer at all, I wonder how the rebrand will go?