The Ley Of The Land: Lines Brew Co.

Posted on November 3, 2017 by Simon Williams 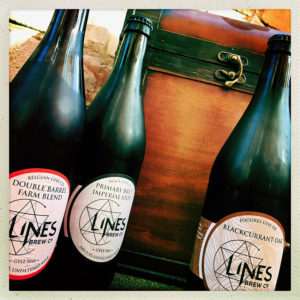 Lines Brew Co. of Caerphilly, Wales are doing something a little bit different and from my experience so far, they’re doing it very well.
Set up earlier in 2017, Lines brew and, almost more importantly, are blenders of varying Lines of Beer, including a Myrcene Line – Yellow: Hops (IPA/ Pale), a White Line – White: White beer (Wit/ Weiss), a Belgian Line – Red: Of Belgian or French origin (Saison, Abbey, Biere De Garde), a Foudres Line – Brown: Varying age in wood foudres, barrels or locally harvested yeast (sour or barrel aged), a Fruit Line – Green: Beers brewed or aged with fresh fruit (fruit beer) and a Black Line – Black: Dark beers (Imperial Stout/ Bourbon aged Stout).
They are also taking an environmentally friendly approach to the production of their wares, and aim eventually to run entirely on renewable energy.
And yes I know that you’re probably thinking, “All of this is very interesting but what about the beer?”
The beer is presented in 660ml “sharing” bottles and I was able to get hold of three to try (I didn’t share): 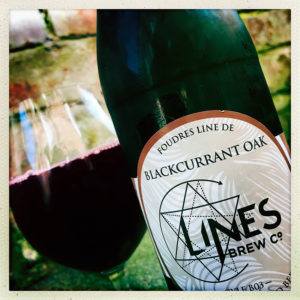 Blackcurrant Oak (4.3%) is an Oak barrel aged Blackcurrant Bretted Saison blended with a young sour and it’s a tart and fruity delight.
Pouring a deep and satisfying purple red, the aroma is fresh forest fruit and farmyard silage, rich and round and appetising and it leads you down into a beer whose flavour is all blackcurrant jam, toffee biscuits, brittle autumnal hedgerow leaves and the gentle hum of damp wood and mushrooms in the background.
The Brett and the young sour bring the tangy zing of lemon zest and steely herbal leaves and make for a long and intensely dry bitter finish.
Super stuff. 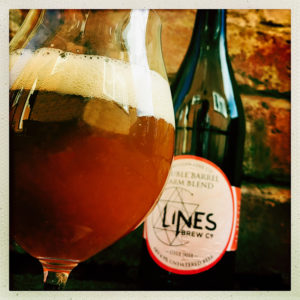 The Double Barrel Farm Blend (4.9%) is nowhere near as sour as I was expecting, it being a blend of two Brett barrels and a Farm Sour.
Don’t get me wrong, it has a lovely big tart punch in the initial taste, but that is swept aside by a rich round and earthy Saison-esque yeast bite that makes the beer feel deep and rich and rewarding.
You find brown sugar syrup and doughnuts, honey and a hint of walnut from the malting, while the hops are sharp and herbal, dry and pithy.
All this and a lemon zest zing in the bright bitter finish.
Lovely. 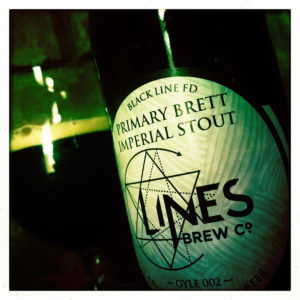 The Primary Brett Imperial Stout (9.5%) is a thing of real beauty.
It pours an inky black with a little creamy head and smells of blackberries, cherries and coffee.
There’s a great big dark chocolate and toffee brittle heart to this beer, along with well toasted brown bread, honey, black coffee and just a hint of charcoal.
The hopping is brittle and brown, crunchy autumnal leaf litter, orange marmalade and bright zingy lemon zest, and all the while the Brett is making the beer feel tart and earthy, warm, round and meaty, followed by a finish that brings in treacle tart sweetness alongside a lovely bitter dryness.
Yummy.

For more information on Lines Brew Co. including where to get hold of their beer, click this link.