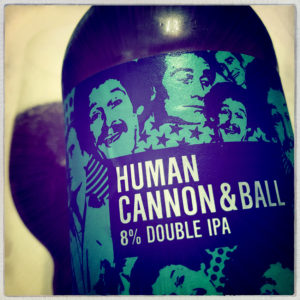 Human Cannon & Ball (8%) is breathtakingly good, and not just because it’s a home brewed Double IPA based loosely on Pliny, because this stands up to any IPA that I’ve drunk in the course of 2017.
It really is that good.
Pouring a rich amber with a little bubbly head, the smell is heavy with pine resin, peaches and sozzled strawberries, and taking a mouthful you find the beer is big and boozy, warm and chewy.
The malting is toffee apples and honeycomb, waffles, pancakes and brown sugar syrup, while the hops – Centennial, Columbus and Simcoe in large amounts – force orange marmalade, sherbet lemons, peaches and grapefruit, lime leaves and garden herbs into your face as a alcohol warmth builds in your chest, pushing the beer along and amplifying the the spun sugar sweetness that lurks behind the long bitter, super dry finish.
This is pretty much my beer of the year. 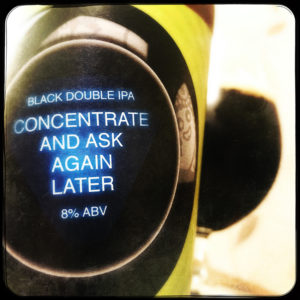 Last night I said that Human Cannon & Ball was my beer of the year, and it was.
But I’ve just opened Concentrate And Ask Again Later (8%), a Black IPA version made by adding homemade Sinimar (steeped, filtered and reduced Carafa III malt) at bottling, and I now have a new favourite.
And I’ll say again, this isn’t just good because it’s been brewed in a garage.
No, this stands head and shoulders above most “real” breweries’ efforts.
All those fresh juicy fruit flavours of Human Cannon & Ball are rounded out here by a lovely soft dark chocolate and coffee warmth, a hint of vanilla and a little plum jam.
The aroma has moved from pine resin stickiness to cinder toffee and damp bonfires, and the finish has a dry cocoa sweetness sitting alongside the fruity bitterness.
Yup, my beer of 2017, and there were only eight bottles produced.