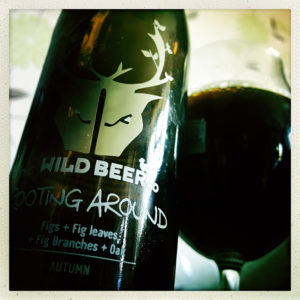 This is my favourite Wild Beer for some time.
It’s a Brown Ale brewed with figs, toasted fig leaves and cinnamon, and it has been aged in a Bourbon cask.
The beer pours a deep mahogany brown and smells of vanilla pods and rum and raisin chocolate, which is a very inviting thing to sniff.
The malting is round and chewy with toffee popcorn, brown bread and lots of honey, and the lack of hops is made up for by delightful flavours imparted by all the figiness.
You find that meaty brown sugar of a good fig biscuit, some toasted coconut and crunchy autumnal leaf litter, chestnuts and woody rolling tobacco, along with the prickle of cinnamon that adds a bagel like quality and some rich damp woodiness and a little hit of booze from the barrel ageing.
My only complaint is that the beer comes in a 330ml bottle because I could drink this in pints.