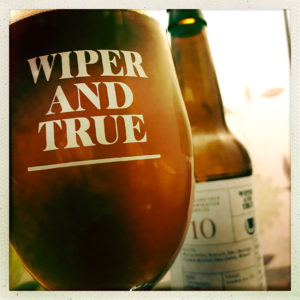 Brewed in collaboration with Birrificio Del Ducato, I was expecting much more from this.
Later Song is a Strong Ale brewed with dried apricots that pours a rich amber with a little creamy head and smells of toffee popcorn and brandy snaps.
The malting is a round sticky toffee pudding, digestive biscuits and a splash of runny honey, and the hops bring a little lemon curd and some country lane greenery.
But the apricots are difficult to find and, though the beer is warm and boozy, it just isn’t quite as big and bolshy as I was expecting.
Maybe I was expecting too much, after all this is perfectly drinkable, it just hasn’t excited me like I was hoping it would.