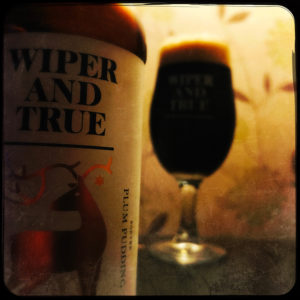 This is very good indeed, though I’d probably have called it Figgy Pudding rather than Plum Pudding as that’s what I taste in here.
This lovely little Porter has been brewed with dried fruit and cinnamon and is heavy with malty goodness.
You’ll find chocolate and coffee, toasted brown bread, toffee, waffles and honey, and there’s a gentle smokiness that wafts around in the background while the hops provide some sharp nettle tea and lemon zest, orange marmalade and hazel leaf pithiness.
The dried fruit and cinnamon bring a soft earthy spiciness and round chewy fruit, though as I said right at the top, it’s far more like figs – Fig Rolls to be precise – than anything to do with plums.
The finish holds a boozy warmth and a dry cocoa sweetness.
Lovely stuff.