A Pair Of Lagers From Renegade Brewery

Posted on December 8, 2017 by Simon Williams 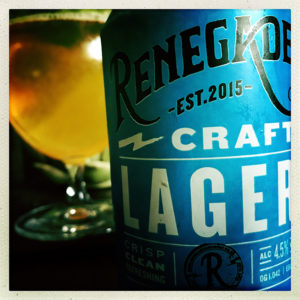 Craft Lager (4.5%)
Other than not being a fan of the word “Craft,” I like this lagered beer very much.
It has spent six weeks lagering and been brewed with Fuggles and Progress rather than the more traditional Saaz and the like, and the result is a beer whose malts provide a smooth and creamy caramel and doughnut body that’s made spicy by a light yeasty kick, while those hops bring herbal hedgerow greenery, nettle tea, lemon zest and a touch of sorrel as you’re led into the long bitter and superbly crisp finish. 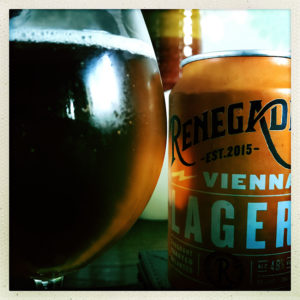 Vienna Lager (4.8%)
Renegade’s Vienna Lager is very easy to drink, doing all the right things in all the right places.
The aroma is sweet with honey, peaches and apricots and the beer sits a warm amber in my glass.
This is a much maltier beer that their Craft Lager, with a big toffee and shortcake, runny honey and crumpets forming a big sweet body.
The beer feels good and creamy as well and there’s a spiced orange marmalade that builds as you drink.
It’s peppered with the pithy mown lawns and lemon zest, apricot and chamomile tea of the hops.
All this goodness and a long bitter sweet finish makes this a very good beer indeed.