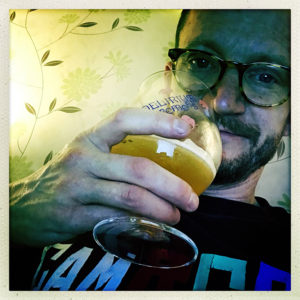 What an odd year in beer.
A year that saw the supermarkets take on lots and lots of new lines, a year in which canning beer became the thing.
It’s the year that Cloudwater gave us their thirteen takes on Double IPA that wowed pretty much everyone and led to them winning the CAMRGB Beer Of The Year Award for their V13.
I didn’t get to anywhere near as many events as I’d have liked to and I certainly didn’t organise anywhere near enough CAMRGB events (I’d still like some help with that, if anyone can be bothered).
Weirdly, some of you may think, one of this year’s highlights was the rediscovery of Fullers’ ESB, which in a world of mega hopped Pales and super juicy IPAs, came as a rich round chewy pint of satisfaction amidst a world of zesty citrus, and reminded me that there’s something very special about a well made Best Bitter.
But if I’m brutally honest, and I do try to be, 2017 was spent in the shadow of my depression and anxiety kicking me firmly in the groin and reminding me that the darkness can creep up on me when I’m least expecting it.
Arguably there’s no reason for me to feel these things.
After all, I have a stable job, a family, a hobby that brings me free beer and the odd outing and a couple of bands that are lucky enough to have their records paid for by others.
But mental health doesn’t work like that, and after a couple of short bursts of anxiety that saw me lose a week here and a week there in the first half of the year, I was hit by the biggest bout of illness that I’ve had for over a decade and that saw me off work for eight full weeks and back on anti-depressants for the first time in more years than I can remember.
It switches your perspective, changes the way the world works, and initially had me unable to leave the house or talk to others.
My life online was my lifeline, allowing me to communicate without real interaction and that meant that people thought everything was OK.
After all I was blogging and tweeting and Facebooking.
But taking my beloved Sylvia (an eight speed racing bike) out at eight every morning and not returning until midday, riding endless loops of south Leicestershire and speaking to the world on my own terms was pretty much all that kept me sane.
And even then I wasn’t sure.
Later in the year, and coinciding with me getting a grip back on my head and returning to work, I was offered the chance to help curate the Imperial Beer Club range.
I thought long and hard about it.
Would it mean that CAMRGB would become partizan? Was it selling out?
I decided that, 1. No it wasn’t, 2. I’d help others discover some great high ABV beer and, 3. F*ck it, it’s be a laugh.
And so here I sit, it’s Christmas Eve and I’ve got a glass of Delirium, Countryfile on the telly and the determination to make sure I do more in the beer world in 2018, make sure that more CAMRGB events happen and that we all have fun.
Cheers everyone, and here’s to moving forward.

Founder of CAMRGB. Member of The British Guild Of Beer Writers. Leftist bigmouth. Old and grumpy.
View all posts by Simon Williams →
This entry was posted in Beer Events, CAMRGB and tagged 2017, 2017 review, Beer, CAMRGB, Drinking. Bookmark the permalink.