Posted on December 4, 2017 by Simon Williams 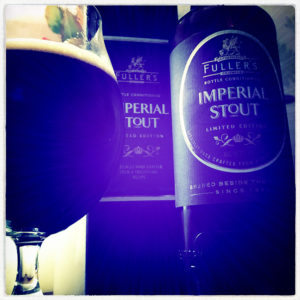 I was so pleased to find this in Waitrose this afternoon that I had to try it straight away.
And boy oh boy, it’s worth drinking right away.
Fuller’s Imperial Stout is a Limited Edition brew and it’s astonishingly good, pouring an inky black with a tiny cappuccino head, the aroma is plums and rum, which is as satisfying to say as it is to smell.
This is a malt heavy beer, the addition of rose buds adding a delightfully fragrant Turkish Delight floral kiss to the edges of the treacle tart, toffee and coffee, honey and brioche of the body, while the hopping – Centennial if you’re interested – brings chestnuts and hazel leaves, aniseed, lemon zest and chamomile tea.
As you work your way into the beer a rich chewy liquorice builds, somewhere between dandelion and burdock and cola jelly sweets, it’s saved from being overly sweet by the an earthy tobacco and coffee bean woodiness that is driven forward by the chest warming boozy heat.
I wish I had more than one.