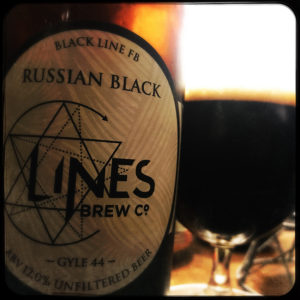 Russian Black is an Imperial Stout that tastes dangerously smaller than its 12% and therefore is far too easy to glug.
Even so, it’s a massive beer that gives you miles and miles of tamarind and treacle tart, espresso and dark chocolate, prunes, plums and meat stock.
It’s a beer that kisses you with Marmite, that dark meaty and lightly salted goo forming the backbone of this beer.
It’s sandy dry yet chewy and sticky, and the hops add some much needed greenery, with bitter and pithy hedgerow foliage, a splash of lemon juice and some orange marmalade.
But it’s that lightness to the feel of the beer that’s dangerous, because it really doesn’t feel anywhere near its ABV, leaving you (me, in this instance) to try and stand up after drinking the full pint in just a few mouthfuls.
Superb.