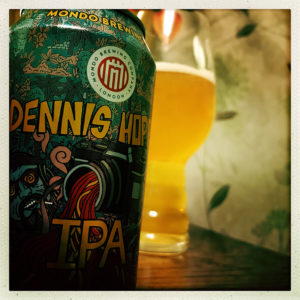 This is a rather fine and juicy beer, though I’d perhaps stop at calling it a Pale Ale rather than an IPA due to its soft malt underbelly and the fact that the hops, though big and bright, are rounder and juicier than they are sharp and zesty.
But that’s just being pernickety, because Dennis Hopp’r (good name, by the way) is a very enjoyable beer that is bursting with melon flesh and lemon curd, peaches and pencil shavings both in the flavour and aroma, while the malts provide creamy caramel wafers and bagels.
There’s even a little spicy yeast kick loitering around as you head to the splendid tropical fruit sweetie of the finish.