Posted on December 2, 2017 by Simon Williams 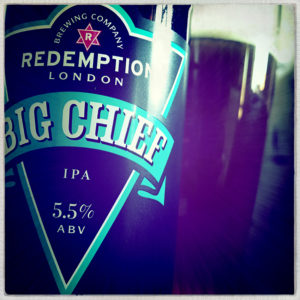 So sure was I that not only had I had this before but that I’d already written about it that I’d started to glug before I realised my error.
And this is a glugger.
Big Chief is an IPA with a big malt body full of toffee and honey, waffles and doughnuts and just a little hint of plum jam.
It’s solid and chewy and satisfying.
The hops sweep in over the top, hitting you with garden foliage, lemon bonbons and a dab of orange marmalade, making for a beer with a super bitter sherbet fizz of a finish.