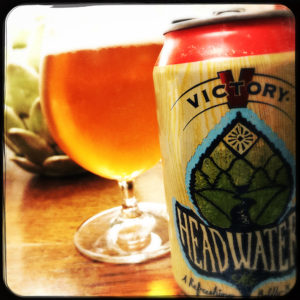 When I first tasted Victory’s beer I was blown away by firstly Hop Devil, then Golden Monkey And Dirt Wolf, and so I was expecting a lot from this can of beer.
Maybe I was expecting too much.
Headwaters is perfectly drinkable, but for all its shouting about being, “boldly Hopped,” this tastes remarkably like a Best Bitter.
It’s a heavily malty beer, hefty with digestive biscuits and toffee, honey and brown bread.
There’s some peaches in the aroma, but even they are drenched in caramel, while the hops provide a little brightness in the form of lemon zest and chamomile tea, some woody undergrowth and a smack of nettles.
All in all, it’s alright, but only just.

Source: The Beer Hawk
NB: A couple of days after writing this I was in Asda and spotted it on the shelves there.