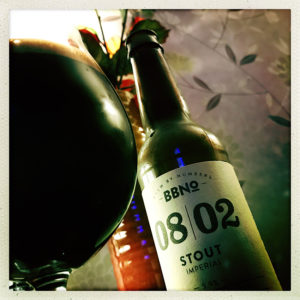 Brew By Numbers keep on getting things right, and this Imperial Stout is no different.
It’s a treacle and molasses thick beer that pours an impenetrable black with a tiny cappuccino head and smells of coal tar soap and cocoa powder.
This is a dry beer, an almost sandy beer that’s packed with bitter chocolate and coffee, woody tobacco and burned wholemeal toast.
There’s a light smokiness, more coal tar soap than bonfire night, its creamy and smooth but incredibly pithy and dry, the rum and plum pudding booze adding some much needed roundness to a beer that has hops in it, though apart from the snap of autumnal leaf litter and a blob of orange marmalade you’d not notice them if they were absent.
08|02 is an absolute delight.