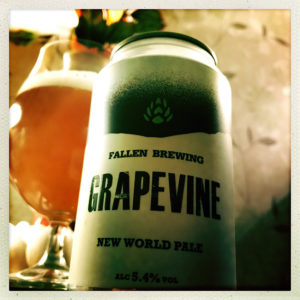 Fallen continue to impress with just how much flavour they cram into their little cans, and Grapevine is no exception.
It’s a New World Pale Ale that pours a peachy gold with a little creamy head and smells of honeysuckle and stone fruit and, taking a swig, you are greeted by so much hoppy fun you’d swear Grapevine’s an IPA.
There’s mango and peach, lemon bonbons and a dab of orange marmalade, but after the initial hit they’re pulled back into line by a big round chewy toffee pecan pie of a malt that’s sticky and chewy, sweet and nutty, making for a finish that’s equally brown sugar sweet and lip smackingly bitter.