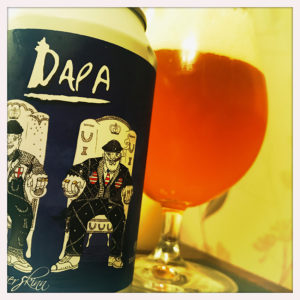 I’m not overly impressed by this Double American Pale Ale, it has some good things going on, but it struggles with balance.
There’s a chest warming boozy heat that’s initially rather nice but quickly becomes a bit harsh as it overpowers the brown sugar syrup and biscuits of the malting instead of making it richer and rounder, taking away rather than adding to the overall feel of the beer.
And the hops are a bit confused as well, with Magnum, Equinox, Exp 431, Citra and Mosaic all fighting each other instead of working together, meaning that instead of waves of citrus and soft fruit, herbs and undergrowth, there’s a mild confusion that leads to a homogenous wash of vaguely fruity, slightly herbal nondescript harsh and bitter hops.
There’s a good beer hiding in here somewhere, but it needs some work.