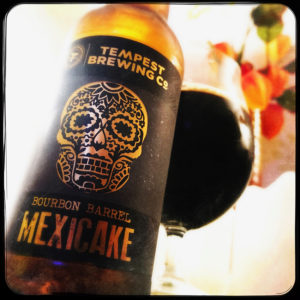 In their wisdom Tempest have taken their already brilliant Mexicake Chilli Stout and aged it in Bourbon barrels, and the result is a massive pudding of a beer.
It’s round and boozy and very very sexy.
The barrel ageing seems to have amplified the richness of the vanilla and the cocoa, and the earthiness of the cinnamon.
The aroma is all rum and raisin chocolate and the beer pours an impenetrable black with a little cappuccino head.
Taking a swig you find a thick and rich treacle tart and chocolate pudding, honey and vanilla trifle body that’s round and chewy, while the hopping is little more than a smack of nettle tea, adding some dry pithy sharpness.
The barrel ageing adds a big hit of chest warming rum, pushing the beer along with a damp woodiness that rounds the beer out, making the finish sumptuous and sweet, while the chillis gently prickle on your tongue right at the very end.