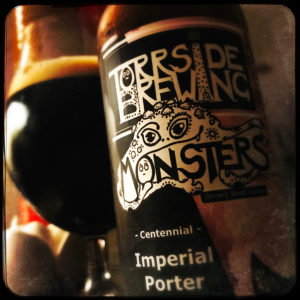 Part of Torrside’s Monsters series of strong beer, their Imperial Porter brewed with Centennial hops is superb.
It pours an inky black with a little cappuccino head and smells of coffee and molasses.
There’s an amazing malt body that is thick and chewy with treacle tart, toffee ice cream, honey, brown sugar syrup and toasted brown bread.
It’s round and gloopy and sweet and tempered by a pithy hazel leaf, woody rolling tobacco and lemon zest sharpness from the hops.
It adds some much needed brightness to the chocolate digestive biscuit and sherry trifle boozy sweetness of the finish.
I’d like to eat this with a spoon.