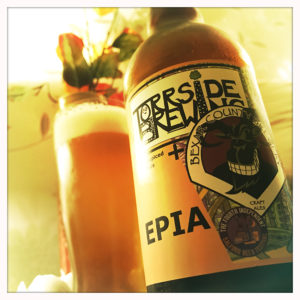 To put it simply, I could drink this forever.
Torrside’s EPIA is a Pale Ale brewed with Tikka spices, a blend of warm and earthy Indian ingredients that have been used in the most deliciously gentle way.
This was, I believe, originally brewed for the Salford Beer Festival, an event I’ve not yet made it to, but have on my radar.
EPIA pours a pale gold with a nice fluffy head and an aroma that’s full of cinnamon and honey.
The malting is a gently chewy caramel wafer, maple syrup pancake and shortbread delight and the hops add green and pithy garden foliage, some zingy lemon zest and pithy mown lawns.
And all this goodness is taken to a completely new place by the spices.
They’re earthy and warm, sweet and salty and moresome, making the beer feel a like a freshly baked cinnamon bun, star anise and cardamom adding even more depth and making the finish rich and round and satisfying.
EPIA is a triumph.