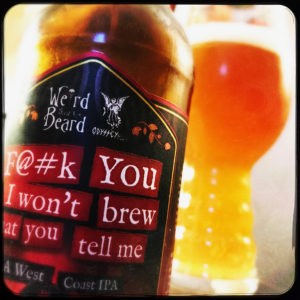 Kicking back against the NEIPA bandwagon, Weird Beard decided to brew a face contortingly bitter West Coast IPA.
What’s more, it’s superb.
It’s a big bullish beast of a beer, its aroma hitting you up with lemon curd and pineapple while its malts come on all soft and subtle, caramel and shortcake, honey and pancakes developing a delightfully supple backbone.
But then the hops jumps in, Simcoe, Centennial, Chinook and Columbus attack your senses with pencil shavings and sherbet lemons, lime leaves, fistfuls of metallic herbal foliage, orange marmalade and redwood resin.
This sexy hop action is pushed forward by a boozy brandy heat that adds a little brown sugar syrup to the lip curlingly bitter finish.
Keep doing your own thing, Weird Beard, it’s why I like you so much.