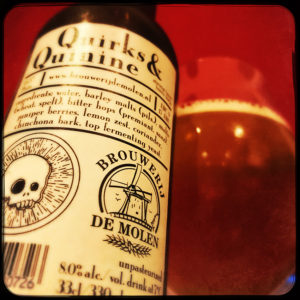 Brewed in collaboration with Beavertown, Quirks & Quinine is a, “Gin & Tonic Spiced Saison,” and an absolute delight.
Brewed with juniper berries, lemon zest, coriander and Chinchona bark, along with Premiant and Saaz hops, Pils barley, wheat and spelt, from beginning to end it is utterly delightful.
It starts with a spiced juniper, lemon curd and honey aroma that drifts up to you as the pale golden beer slips into your glass.
Then there’s the light and subtle caramel ice cream cones, shortbread and honey of the malts and that green herbal snap of the Saaz followed by a hit of hedgerow foliage and mandarin from the Premiant.
The coriander brings more leafiness and a touch of warmth, and the lemon zest sparks away in the background while the yeast adds an earthy fungal chewiness and the juniper makes everything feel crisp and clean.
As for the Chinchona bark, I’m not sure I can spot any flavour from it, but I read that it is good for one’s appetite, promoting the release of digestive juices.
This is a fabulous beer.