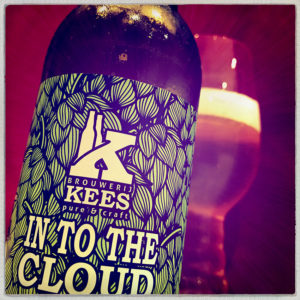 Into The Cloud is a Triple New England IPA.
Yes it is.
A great big boozy New England IPA.
The frightening thing about Into The Cloud is that if you’d not been told about it being a Triple New England IPA you may think it’s safe and easy to drink as it hides its booze scarily well.
There’s a lychee, apricot and honeysuckle aroma and the beer pours a pale gold with a fluffy head.
It fizzes with life as you take a swig and are met by peaches and mango, bracken, nettles, orange marmalade and lime zest.
Behind this hoppy bonanza is a solid brown sugar syrup, shortcake and salted caramel malt base that turns to a brandy snap warmth as the alcohol kicks in.
But still it doesn’t feel anywhere near its weight, allowing you to take big swigs without worrying about the consequences.
But the thing is, by the time you’ve hit the dry bitterness and bathed in the sticky resin of the finish, you couldn’t care less about the consequences.
Super.