Posted on February 3, 2018 by Simon Williams 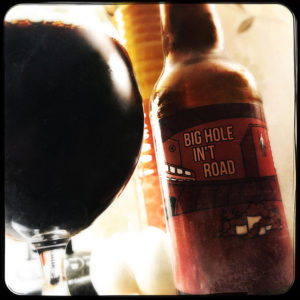 With lashings of liquorice, dark chocolate and treacle, this is a superb Stout.
It pours road tar black, thick and unctuous, and smells of window putty and prunes.
Taking a mouthful is plunging yourself into the depths of a big black Beery hole, fathoms of flavour bounce around your head, from aniseed and tamarind to toffee, coffee and honey, burned wholemeal toast, coal tar soap and bitter chocolate.
There’s some much needed hazel leaf and bracken pithy hedgerow hopping that adds a splash of brightness, but altogether this is a beer about the darker side of drinking, a beer to sink into.