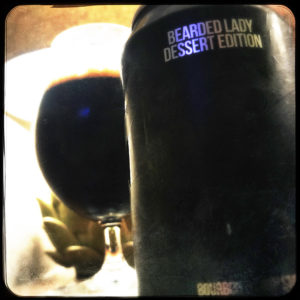 Regardless of the fact that this is a Bourbon Barrel aged version of Bearded Lady with chocolate, vanilla and cinnamon in the mix, the initial flavours that hit me when I took my first mouthful was coconut.
In fact, this beer tastes like a brandy soaked Bounty bar, all chocolate, coconut and vanilla soused in brandy.
The beer pours an impenetrable black and smells of whisky fuelled treacle tart, and you find a delicate smack of herbal hedgerow, conkers and maple syrup leaf litter from the hops.
The barrel ageing adds a damp woodiness and a hint of Coca Cola, but it’s the chocolate, vanilla and cinnamon that make this version of Bearded Lady feel like something big and buxom, fleshy and sexy.
Like a burlesque dance in a can, Bearded Lady Dessert Edition is a beer to spend some time with in a candlelit room.