Posted on February 7, 2018 by Simon Williams 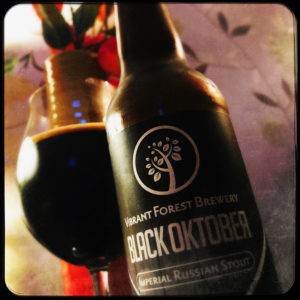 This is a fantastic Russian Imperial Stout that does everything you want from the style and does it just right.
The beer feels round and thick and chewy, but also intensely dry and almost sandy.
It pours an impenetrable black with a wispy cappuccino head and smells of liquorice, molasses and rubber balls.
This is a malt heavy beer, fathoms deep, it drags you down into a dark and sexy world of treacle tart and tamarind, coal tar soap, honey on toast, espresso and bitter dark chocolate, the hops adding a light slap of bracken and crunchy red leaf litter, maple syrup and orange zest while the beer pushes along, its rum and raisin boozy heart pounding as you reach the thick gloopy finish.