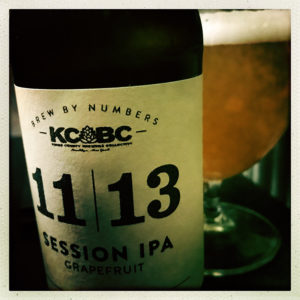 11|13 is a Session IPA brewed with grapefruit zest and made in collaboration with Kings County Brewers Collective.
Yes a Session IPA.
Another one.
This one’s not too shabby though, its light and subtle caramel wafer malts just about holding up against the freshly picked herbal leaves and lemon curd of the hops and the grapefruit zest adding a little extra zip to the dry bitter finish.
But that’s about it.
I’m getting so bored of trying to wring some words out of my old and booze addled brains about Session IPAs because they just don’t do it for me.
I’m not even really sure that I see the point in them.
Just make a Pale Ale and give us a good malt heart instead of trying to pack so much hoppiness into a beer that hasn’t got the body to hold it up.
If I want an IPA I’ll accept the booze levels, if I want something lighter and paler then a modern Pale Ale has enough hops to keep me happy, especially given how much can be made of our modern hop strains.
Swamping a lower ABV, lightly malted beer with the hops generally used in something twice the size just leaves you with a beer that feels thin and oily because hops, lots of hops, are good, but they’re better when they’ve a solid malty backbone and a good alcohol kick.
And so I apologise to the Brew By Numbers gang, you just happened to be the beer that I opened when I needed to vent, and your take on my dreaded SIPA style is much better than most.