A Tale Of Two Festivals, A Play In Two Acts

A Play In Two Acts, Part 1
Two beer festivals on two consecutive days, both in theatres. But there the similarities end.
In reality the two events had two very different reasons to be and different aims. What happened follows. 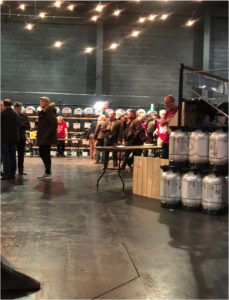 Act 1 – Leicester Friday 9 March 2018
The Leicester CAMRA Beer festival has been taking place for many years in my home town. For as long as I can remember it has been in a Hindu community centre but this year it was in the recently refurbished Haymarket Theatre.

It’s a red brick theatre built as part of a 1970s shopping centre in the middle of town which the council had been trying to dispose of for a number of years since it closed 10 years ago. It’s intended mainly for computer game tournaments but opened with a beer festival.

The real joy was the stage and backstage area. There were 200 beers on stillage mostly in alphabetical order of brewery, all gravity delivery except for three from Everards on beer engines and half a dozen keg beers, which was a first for Leicester CAMRA. I met up with the friends I go with every year. We had taken the Friday off work as usual to get to the third day of the festival. We got there early so we managed to grab a spot to sit on the apron of the stage.

The theatre seating was mostly a waste of space. People sat on the front row and in the seats next to the aisle but people can’t get in or out of theatre seating without getting everyone to stand up. And there’s nowhere to put your beer.

The food was cobs, pork pies or curries. The samosas I had were just about the worst I have ever had. Which is a disgrace in a city with just about the best Indian food in the country.

The beer did show some evolution from CAMRA. The golden ales were harder to find this year and there were a lot of IPAs and a good selection of Stouts and Porters. Given the amount of beer there most people will find something to their taste and it showcased a lot of local breweries. I had some good beers, a really good time and went home at tea time to give my liver some time to recover before Saturday. 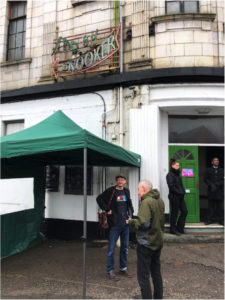 The Sheffield Indie Beer Feast took place the day after my trip to the Leicester CAMRA Beer Festival. It was held in the Abbeydale Picture House. I had hopped on a train and met up with a couple of newer friends for the inaugural event of the one day festival.

The Abbeydale Picture House is an Art Deco movie theatre built in the 1920s in what is now the antiques quarter of Sheffield. It is shabby and run down and in need of some work. But it had real character and I felt comfortable in its faded grandeur.

There were steps to get in and a slope down to the front of the auditorium. It was not good for anyone with mobility difficulties and seemed to be an accident waiting to happen. There was also a strange steps down and up via the toilets to the food area.

The main cinema area was the heart of the event. There were seven or eight brewery bars arranged at the back and the front of the venue serving a few taps each. The bar staff were brewers and staff from the breweries in the main so they were very knowledgeable, chatty and very keen on what they were dispensing. Nearly all the beers were on keg.

The theatre seating was mostly a waste of space. Hardly anyone sat down although there were some tables and chairs in the food room.

The food was far more adventurous than the Leicester event. There were burgers, arancini (deep fried risotto balls) and bao (Chinese steamed buns) which were really good.

The beer was also far more adventurous than the Leicester event. The ABV was generally much higher, more hops, more exciting adjuncts and more taste. I had some good beers, a really good time and then headed off for my train home via another couple of pubs for more beer and more chat.

The Leicester event was held in the newer, more up market venue but catered for far more people, far more beers and more traditional tastes in the main. It probably also got more people through the door who knew nothing about beer.

The Sheffield event was dearer to get in and the beer was also dearer but the quality was also much higher.

The average age was at least 10 years lower in Sheffield and the proportion of women was far higher. The mix of ethnicities was better in Leicester but still nowhere near what it should be for a city as diverse as Leicester.

Personally I preferred the Sheffield Indie Beer feast because that’s the kind of beer geek that I am. But I drank some good beer with some really close friends at the Leicester CAMRA beer festival, too.

After my concerns about steps, slopes and accidents waiting to happen, it is ironic that having found the only flat area in Sheffield (the outside seating area at the Sheffield Tap) I managed to fall flat on my face. Some minor abrasions and a little loss of dignity didn’t spoil my day.

– NB: This article was written for CAMRGB by Chris Willars, March 2018.