Amundsen Bryggeri Dessert In A Can Chocolate Marshmallow (11.5%) 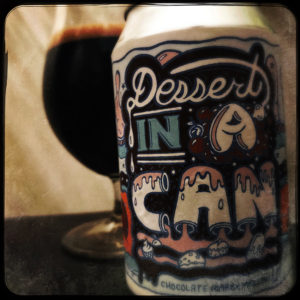 Where Omnipollo blazed the trail for ridiculously flavoured high ABV beer, Amundsen have refined the style and the result is a sensationally sexy beer.
This version of Dessert In A Can, Chocolate Marshmallow, tastes exactly as described with loads of thick creamy whole milk chocolate and sticky sweet vanilla laced marshmallow in both smell and flavour.
There’s also some liquorice and brandy snaps, bran flakes, honey and fresh coffee from the malting, and even the light snap of hedgerow greenery from the hops, but really this beer is all about two things, the fact that is really does taste like chocolate and marshmallow, and the crazily warm and sexy booze that drives the beer along, making it feel hot and damp and sensuous.