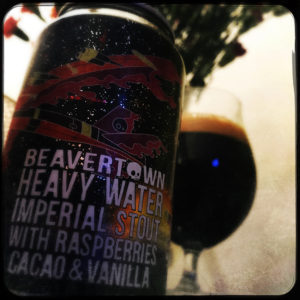 I have a serious problem with this beer.
It sounds like it’s going to be amazing, being an Imperial Stout with raspberries, cacao and vanilla, but there’s something wrong, and that is that the fruit in the beer cuts through in a really acidic way, meaning that the beer that ought to be rich and sticky becomes thin and tart.
So, this is a beer that pours a deep purple brown with a little cappuccino head and smells of chocolate raspberry cake.
And that’s a good thing.
But as soon as you take a swig you find that the raspberries are far too heavy in the beer, instead of adding a background fruitiness they make the beer overly tart, and that wipes out all the rich and round Stout creaminess that you ought to be finding.
The cacao brings a good chocolatiness and there’s a hint of vanilla, but those raspberries are far too strong, making this beer, for me at least, almost undrinkable.