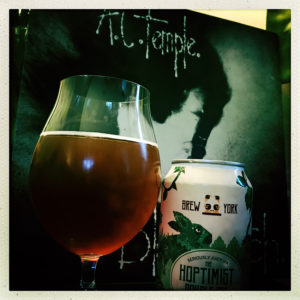 For all it’s friendly, if slightly acid fried, bunnies on the can, this beer is anything but friendly.
In fact I’d go so far as to say that Hoptimist might be evil.
It’s definitely out to get you, and to get you drunk.
The aroma is an enormous bonfire night toffee apple delight and the beer sits a warm and innocently inviting amber in your glass.
And then, from the first moment that you take a swig, a massive sweet brown sugar and honeycomb, pancake, maple syrup and brown bread malt grabs you and sucks you down into its deep and warm boozy heart, while hops slap you and slash you with pithy woody bines, grapefruit pith, orange marmalade and zesty limes.
There’s no escape from it and you just keep drinking, even though you know it will be your downfall.
But what a way to go.