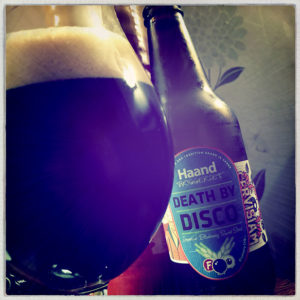 Min kjære Haand, vil du være kjæresten min?
Death By Disco is a Blueberry Stout and it is immensely good, pouring a deep dark purple brown, the aroma is freshly squished blueberries and dark chocolate.
It’s a sexy and seductive and it entices you down into its deep dark depths where you find a soft and round, chewy malt base that’s all malt loaf and honey, pumpernickel, brunost, toasted wholemeal bread and Bamse Mums.
The hops add some much needed sharpness and a little bitter slap of grapefruit zest and dandelion leaves.
And all the while the blueberries build, they’re rich and juicy, plump and fruity and, alongside the malting make the beer feel like a well made bagel under a dollop of vanilla ice cream.
Yes, I want Haand to be my girlfriend.