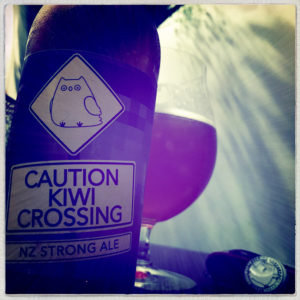 Caution Kiwi Crossing is a dangerously good beer that hides its ABV frighteningly well.
In essence it’s an impressively big Pale Ale, not an IPA due to the subtlety of the hops and the big round caramel and ice cream cone, straw and hay bale, honey, shortcake and pop corn malting.
The hops in question, three unnamed NZ strains, kiss you with gooseberries and green grape skins, kiwi fruit, lime leaves and green tea, but they’re not massive sharp slashes of bitter flavour, more gentle washes of colour over the lovely soft malts.
But about halfway down the glass the booze kicks in with a brandy snap richness and all of a sudden you realise you’re drunk and it’s too late and the little owl is laughing at you.