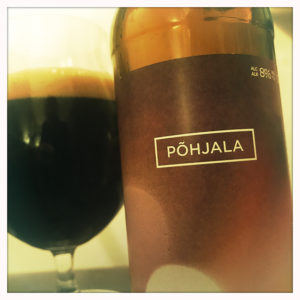 Fourteen or fifteen years ago I visited Estonia and found Tallinn, its capital city, absolutely beautiful to walk around.
Back then I was more of a red wine drinker and so I wasn’t fussed that the bars I ventured into served run of the mill Euro Lagers and, should I want a taste of “home”, Guinness.
A few years later I was offered a job to be based in Tallinn and having visited the city I was very tempted to take it, but my partner was pregnant and I thought that maybe I ought to stay where I was.
And now, all these years later, here I sit with a delightfully made Estonian Chocolate & Vanilla Oak Aged Imperial Porter and it’s made me really want to visit Tallinn again.
To walk around the old town, to look at the graffiti that all those years ago felt like rebellion and to take in their beer.
Because this modern styled and beautifully executed Porter is superb, pouring an inky black with a fuzzy cappuccino head and a honeycomb and chocolate aroma, it looks and smells sweet and sexy.
The malting is rich with dark chocolate and fresh coffee, treacle, molasses and a splash of prune juice, while the hops are crunchy and brittle, all maple syrup and lemon zest, pine and conkers and pencil shavings.
Then there’s the rich vanilla, the creamy chocolate and the damp rind woodiness of the oak ageing, pushed along by a warm brandy heat that makes Jõuluöö a really super beer.