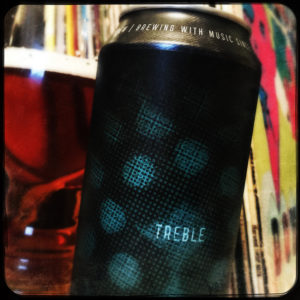 Signature are about to launch a range of limited 440ml cans and I’ve been lucky enough to have been sent a couple as I wasn’t able to make the launch party at the brewery and the gang at Signature are nice like that. Even though, on occasion, I’ve said I didn’t like some of their beer.
This one, Treble, is an absolutely super Imperial IPA. It’s rich and round and fruity whilst also maintaining a refreshing crispness.
The beer pours a rich peachy gold and smells of bubblegum and honeysuckle drenched in white rum, and taking a swig you’re immediately met by a delightfully chewy malt body that’s soft and creamy and packed with brown sugar syrup, salted shortbread and pancakes and lots of runny honey.
The hops jump in to the mix with a hit of lime leaves and lemon sherbet, garden herbs, nettle tea and orange marmalade that’s been glued together with a big blob of redwood resin.
All this is pushed along by a super brandy snap boozy warmth that rounds out the edges of the sweet and tingling candy store finish.