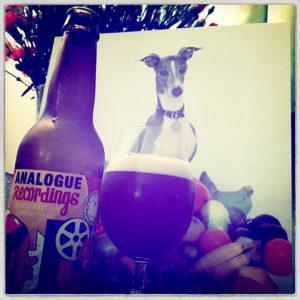 Sitting in my front room listening to Shellac, it seemed fitting to grab this bottle from the fridge and open it.
After all, Steve Albini is known for recording everything in analogue, spending time getting a band to sound just right and then pressing record on the tape machine.
I’ve been a fan and an admirer since buying Big Black records in the mid eighties and I’m a fan and admirer today.
I’m also a fan of Uiljte, who seem to effortlessly make uncompromisingly interesting and drinkable beer.
Analogue Recordings is an immense beer, a thirteen percent Red Ale aged in Carsbridge barrels, it’s thick and chewy and rich with treacle tart, tamarind and honey.
It could have been overly sweet, but it is tempered by a steely basil and damp hedgerow hazel leaf hopping that adds a good dry pithiness while the barrel ageing brings a rich woodiness, a rum and raisin boozy heat that warms your chest and black cherry stones, tobacco and toffee apples that make for a magnificently gloopy and rather sexy sticky finish.