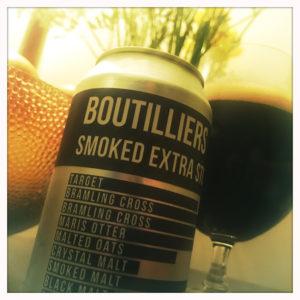 I have to admit that when I saw that Boutilliers were based in Faversham I immediately thought that it was just another Shepherd Neame trademark.
And in essence that wouldn’t be a problem as I quite like much of their beer, ignoring their contract brewing of several “world” lagers and sticking stuff in clear glass
And so I trudged around the internet determined to find a connection between Boutilliers and Shepherd Neame, especially as they are a limited company.
But the fact is that it really doesn’t matter as this is a super little beer with lots of flavours to keep you interested right down to the last mouthful.
The Target and Bramling Cross hops provide some fresh and dewy hazel and nettle herbal hedgerow, a bright splash of greenery across the main body of the beer which is heavy with peaty damp wood and bonfires, chocolate and coffee, burned wholemeal toast and frankfurters.
It’s malty and rich and round and chewy, and has a finish that’s hefty with brown sugar glazed doughnuts and bacon.
So it would seem that Boutilliers are nothing to do with their enormous neighbours, but even if they were I’d be happy with beer as good as this.